The Save-the-Lyon Commission, Inc. is dedicated to the preservation and restoration of the Dana L. Lyon School site, comprising two historic anchor buildings located in the registered Historic District of Bath, New York. The commission recognizes that saving this site will play an integral part in the revitalization of our village.

During June of 2004, two of the five Ira Davenport heirs traveled to Bath: Pamela Waterman Gale, with her husband Chris, and Mary Waterman Lunt with her husband, Bill. During their visit, they toured the school site as well as several other sites of local interest connected with their family history, such as the Ira Davenport Hospital and the Davenport room located in the Magee House. The Ira Davenport heirs filed suit to save the old portion of the Dana L. Lyon School site. On February 3, 2007 the Court of Appeals decided in favor of the Waterman heirs. The primary annex was then rendered by the Save-the-Lyon Commission, Inc. from the Waterman heirs. The Waterman heirs expressed their interest in preservation, education and arts. With their continued support the Save-The-Lyon-Commission, Inc. intends to create a center for arts and education.

In 1999, the Preservation League began a statewide endangered properties list. The list, named “Seven to Save”, is intended to draw attention to historic places that need help. Placing an historic property on this list denotes that it is worthy of special attention, extra effort, and new resources to secure its future. The Preservation League is pledging their help.

In 2007, on behalf of the Preservation League, their President, Jay DiLorenzo, Chairman Christopher Holbrook, and all trustees, announced the listing of the Dana Lyon School on the New York State “Seven to Save” list. 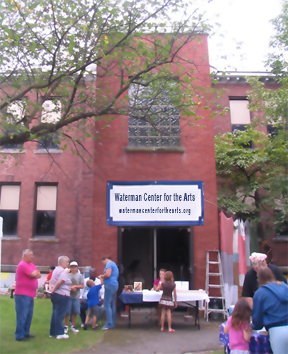